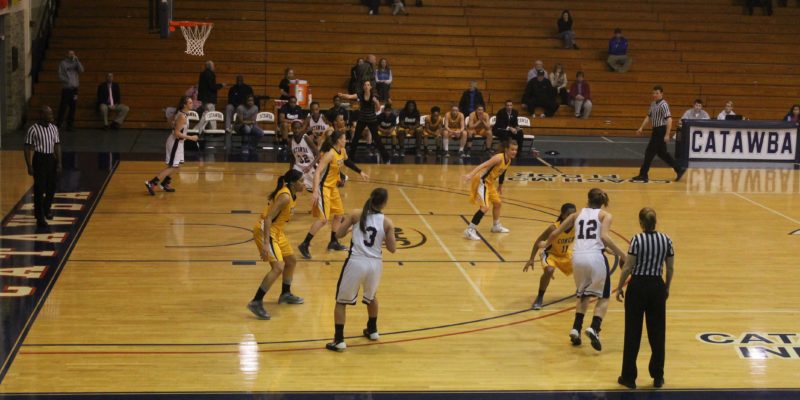 The Catawba Indians women’s basketball team defeated Coker Cobras on Monday night 47-44. The Indians would get off to a fast start as they got the opening tip off and started out with their first 8 points scored by sophomore Zhaquondalee Greer to open the game. Catawba started the game on a 6-0 run before the Cobras finally scored. After the basket that was made by Coker, the Indians would continue their strong push to start the game after a pair of lay-ups by Jada Huntley made the score 12-2 Indians.

Catawba would continue their strong push to start the game in the first half as they would have a lead of 16-4 at the 12:39 mark. The game would get close under the 5:00 mark as the Indians would get in foul trouble and the Cobras would be in the bonus. Coker would go on a scoring frenzy of their own and make the score 23-19 at the 4:18 mark. The Cobras would continue on their scoring frenzy as they would go on to take a halftime lead of 24-23.

In the second half Catawba would come out strong as they would score the first basket as a lay-up by Chloe Bully would give them the lead. The Indians would not keep the lead as the Cobras and Indians would trade baskets the rest of the half and keep it close. At the 6:26 mark, Coker held a 40-36 lead but the Indians would storm back as a 3 pointer by Janna Dixon would make it 40-39 Coker. Catawba would take the lead 41-40 back at the 4:00 mark on a jump shot by Jada Huntley. Coker would take the lead back on jumper at the 2:36 mark before the Indians’ Antoinette McPhail would make a lay-up with 1:20 left to give Catawba a 43-42 lead. Coker would fight back and take the lead 44-43 with 54 seconds left on a lay-up, but the Indians would fight back and with 20 seconds left in the game, Catawba junior Mallary Clay would make a lay-up to give the Indians a 45-44 lead. After Catawba got the lead on the lay-up by Clay, a late game walk call against Coker would give the Indians the ball back with 11 seconds remaining. Catawba sophomore Emma Ucinski would be fouled and go to the line to shoot a 1 and 1 with 7 seconds left where she made both free throws to give Catawba a 47-44 lead and that was the final as the Indians won 47-44.