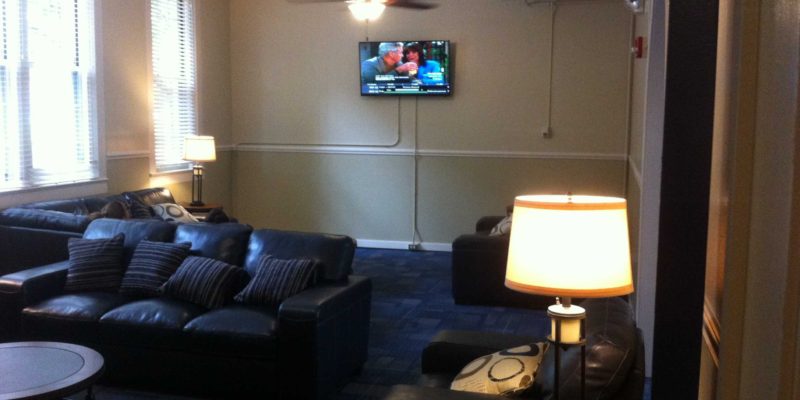 Residential students living in Elizabeth C. Stanback Hall were in for a big surprise on move in day. The dorm’s interior was completely renovated over the summer. Most notably, instead of white walls the halls had been painted a brilliant sky blue.

The three lobbies, two on the first floor and one on the second, were also modernized over the summer. Brand new navy blue leather couches and brown side tables reside in the lobby along with several flat screen TVs mounted to the wall. On the first floor raised chairs and tables are also in the lobby for students to do homework, eat, or simply chat with friends.

Unfortunately, the lobby’s modernization also led for standard lights to be implanted instead of the brilliants crafter chandeliers that used to hang from the lobby ceiling. The lobby also received a new ornate orange rug in the main entrance.

The dorm rooms in Stanback also received new hard wood flooring and most of the doors for the rooms were replaced and painted a navy blue color.

The Stanback residence hall is home to over 130 students this year and a few of the normally single person rooms had to be renovated because of the abundance of students living on campus. There are so many students, in fact, that many RA’s have to room with someone when they usually receive the luxury of their own room.

The final touches on the dorm renovations were completed on the first week of school after students had already moved in. Those final touches were new navy blue plastic covers with slip resistance for all of the stairs in the dorm.

Our Own Shelter Guardians

One Less Degree at Catawba